Hatred in the streets of Montreal, Canada 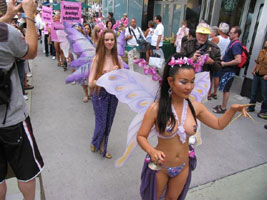 On March 8, about 50 raelians participated to the women�s day demonstration in Montreal.
Veronique, the leader of order of angel in Canada tells us how it went :
�We were there wearing beautiful hats that we had made as we wanted to express our femininity. It started nicely despite the cold, we were feeling solidarity with the other associations walking up the street of Ste Catherine. Suddenly, about half way, a group started to shout � A bas les raeliens� which means something like �get off raelians�. They were people from associations claiming on their posters the respect of human rights and of women�s rights, tolerance and non-violence. A mother even left her child in a pram to come and yell at us derogatory words about our religion. After a while most of the participants were gathered around us telling us we have nothing to do there. Where were we? Was it a march for tolerance towards women? We found ourselves in the middle of a hainous crowd!.�

The Prophet Rael made the following declaration after learning about the event:

�This Anti-Raelian hatred corresponds exactly to what occurred when crowds looked at, and supported with pleasure, the massacre of the first Christians in the Roman arenas. As well as with the anti-semitic acts of hatred in Nazi Germany. Nothing new!!
Nowadays, as it is politically correct to not persecute the Jews, the Blacks or Homosexuals, the only targets which remain, or the only possible scapegoats, are the religious minorities which cause a disturbance, in particular the Raelians... the thirst to hate with impunity which relies on the lowest of instincts of each human being encouraged by the evolving media is not astonishing or new. And that is not attributable to any particular media actions like the burnt crosses... Well before the crosses, when we collected food for the homeless, the reactions were the same. It is necessary to keep a panoramic vision in time.