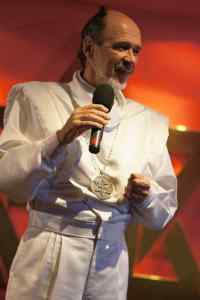 “This planet is sick, with countries treating each other badly and governments treating people badly, and it’s that way everywhere,” Rael said in a speech on Sunday February 20th.
“That’s why so many countries are revolting: first Tunisia and Egypt, and now Bahrain and Yemen. Revolt is happening everywhere. People are fed up with their governments, so they’re making revolutions.”

But they aren’t going far enough, the spiritual leader said.

“These are just little revolutions because they’re just exchanging their present governments for new ones,” he explained. “Those new ones will be the same because power is always bad. What we need is a free society. That’s the future of humanity.”

Rael said that according to the Messages given to him by the Elohim, the advanced civilization that created us, a system called geniocracy is used to guide the Elohim planet. But he said his efforts to share this important knowledge have met with skepticism, if not outright disapproval.

“When they hear about it, people usually think geniocracy is a political system in which geniuses have power over other people,” he said. But this interpretation is totally stupid; there is no power on Elohim planet. Nobody has power there. The Elohim have elected geniuses to be their leaders, and these geniuses guide everybody.”

Their guidance is special and for the good of all, Rael said.

“They guide like all good guides do – like Buddhas or spiritual guides,” he explained. “For example, I have no power over you. I don’t want power; no Buddha wants to have power. I’m just guiding you, showing you the way. And that’s how it is on the Elohim planet too. The geniocracy system is organized in such a way that the leaders show the way. They tell people, ‘This is what we should do, if you all agree we should do this.’”

He then gave an example.

“On Earth right now, there is much pollution and a big problem with oil. Yet there are many ways to make cars run on electricity or even on water. A new car was made in Japan last month that runs on water. In such a case, a geniocratic government would say to the people, ‘This is a good idea, so let’s make electric cars or water-powered cars for everybody!’”

This is not exercising power, Rael said.