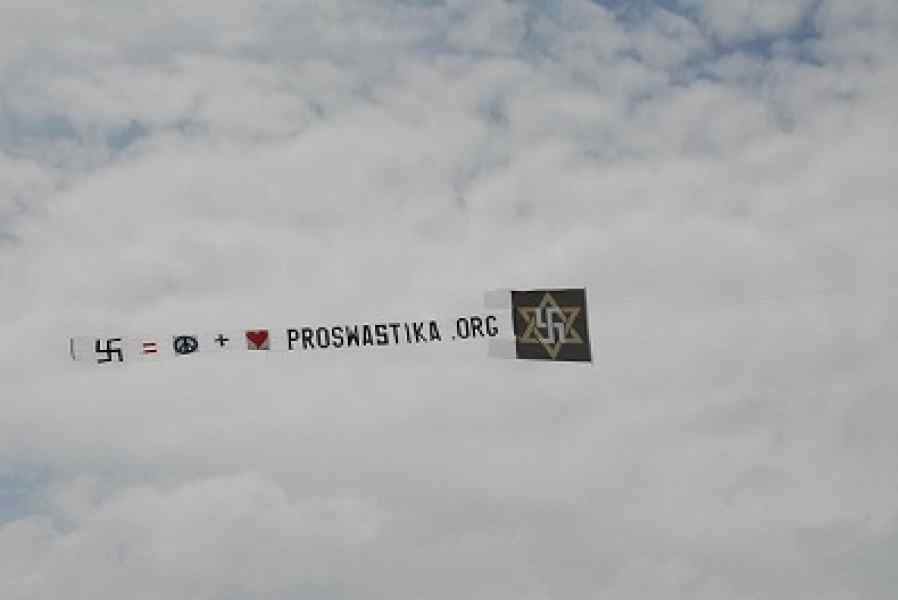 For several years, Raelians have been campaigning for the reeducation regarding the swastika - a symbol which, for the West, largely holds only one meaning while for the East it has a very, very different meaning. This year's campaign was bigger than ever - so big that the campaign was extended to a full week! Raelians from all over the world held "swastika reeducation" demonstrations in countries all throughout the Americas, Europe, Africa and Oceania. You can see colorful photos of this year's reeducation campaign on www.proswastika.org, but the largest story was when a plane flew a swastika banner over New York and New Jersey. Of course New York being known for its large Jewish community, many people were shocked to see a swastika banner being flown over New York and New Jersey beaches.

If you are reading this, you might be among the millions of people who are asking Raelians why we would want to do such a thing. Why would we want to fly a banner with a swastika? Why we would want to openly display "the Nazi symbol"? How could we be so insensitive to the horrors endured by Jews at the hands of deranged Nazis in WWII?

First of all, it needs to be stated that we deeply sympathize with the Jewish people for what they endured. Our philosophy is one of complete nonviolence as well as recognizing the Jewish race as being the chosen people.

Regarding the swastika, the fact is that the Nazis did not create the swastika. They simply used an already existing symbol in a completely opposite way in which it was originally intended thus attaching a new and betrayed meaning to it. The swastika is indeed a very ancient symbol (thousands of years before Hitler) which represented peace, well being and harmony. It is a deeply revered religious symbol for over 1.4 billion people all throughout the world, especially in Asia, just as the crucifix is a religious symbol which millions of Westerners hold dear. The more than 1.4 billion people in Asia are not hiding their billions of swastikas in shame - and rightfully so! They had nothing to do with harming the Jews and they are not allowing what Hitler did to tarnish their holy symbol even if they are surely not feeling well about the West hating their precious religious symbol.

What we are doing as Raelians is similar. We are reeducating the West about the true meaning of the swastika in order to reclaim it from the monsters who used it as a symbol of hate. This is the best way to heal this wound.

To help put it in perspective, ask yourself these questions. If the Nazis would have used the crucifix instead of the Swastika do you think Christians would have agreed to ban the crucifix? Of course not!!

Try also to imagine how the millions of people killed under the crucifix during the Crusades, Inquisitions, holy wars, by conquistadores, etc. felt under the crucifix while being tortured and killed. The crucifix was a symbol of hate for these people whose only crime was to be different. Yet it is everywhere today.

And what of the hate promoted with the crucifix by the KKK? Still, crucifixes everywhere.

And surely the families of those killed by Christians wielding crucifixes saw it as a symbol of hate and held great resentment toward the crucifix just as the families of those who suffered or died at the hands of the Nazis hold resentment toward the swastika. The Crusades, Inquisitions, holy wars, Conquistadores tortured and killed many times the 6,000,000 Jews who suffered at the hands of the Nazis. Yet society forgot about that terrible wrong done by (supposed) Christians and crucifixes are everywhere on the planet without any memory of Christianity's atrocities!

The context begins to take on a new meaning when we think of things from different perspectives like this. So why should more than 1,400,000,000 Hindus, Buddhists and others have to feel shame about their holy symbols? Or why should the swastika be banned in the West? There is no good reason when we consider the above.

Similarly, Raelians find it strange that millions of Christians cherish the crucifix which was nothing but an instrument of torture, humiliation and death for many, many thousands of people. But we understand how and why this is the current reality. The reason is that winners of the wars write the history and this is what the West is trying to do by banning the Swastika.

Raelians, like Hindus, Buddhists and other religions which revere the swastika will continue to, with love and compassion, reeducate the West about the swastika.

So yes, the swastika is a symbol which Raelians hold deep, positive meaning for as well. :-) The swastika is a part of Raelians' official symbol - a symbol coming directly from the Elohim, who are the extraterrestrials (referred to in the Bible, Koran and Torah) who created humanity thousands of years ago and Whom Rael met in 1973 and 1975. This symbol from our Creators consists of a six pointed star intertwined with the swastika and it signifies infinity in space as well as infinity in time - which is an extremely interesting concept and we invite you to read how The Elohim explain this simple yet revolutionary concept which changes, literally, everything! (free download on www.rael.org)