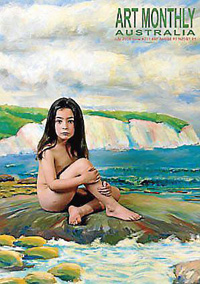 Australia’s leading art publication “Art Monthly” has drawn fierce fire from critics for its latest publication which should a nude 6-year old girl in a modest pose. The editor said that this is an attempt to "restore dignity" to the discourse about the artistic portrayal of children.

Last month we posted the Prophet Rael’s comments on Australia’s government attempt to censor some works (photos) from the acclaimed Bill Henson. This event ignited strong debate in Australia and Art Monthly’s latest cover is causing the debate to heat up even more.

The Prophet Rael commented “One more time freedom of art is the most important freedom and censorship the worst attack on this fundamental freedom. These fanatic anti- nudity Christians, sexually frustrated by their retarded education are trying to impose their middle age "morality" upon all modern society and trying to limit other people’s freedoms. If they don’t like it they just have to continue to read their bibles - through a burka if they wish to do so, and leave other open minded people alone to enjoy art. And at the same time, they will have to censor their own angels, cherubim etc. shown naked in all religious books and even in the Vatican.

As the police discovered when they ceased Bill Henson’s works, nudity has nothing to do with pedophilia and around the world thousands of nudists beaches and resort welcome naked families with children who enjoy being naked in the sun. Nudity is beautiful and should be part of children’s education. Loving our naked bodies is very important to destroy all taboos of the past and increase our self esteem. As long as we are ashamed of our body we cannot fully enjoy life. This is what should be part of children’s education - and art has a fundamental part in this education.”

By the way, the girl portrayed in the photos is now 11 and says these are her favorite photos ever taken of her. (they were taken by her mother) Now that's a healthy education. :-)

As you can see in other current articles on Raelianews, Australia has a history of censorship and things seem to be getting worse instead of better. (most recently, Rael's comments on the Bill henson story as well as our comments on “Notopope” activity taking place very soon)